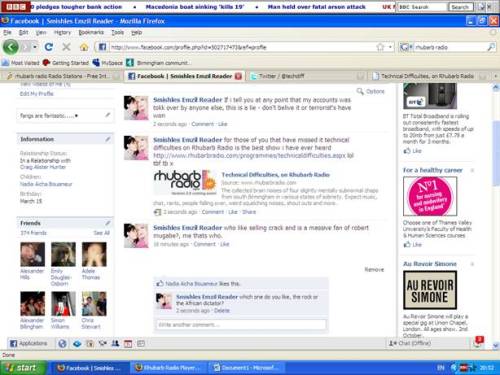 So using some awesome computer skills here are a couple of those songs  in picture form. To listen to the songs drag the pictures from your browser into the audio player of choice. It works I promise

Nothing Compares To You – Me First And The Gimmie Gimmies

thanks to everyone that contributed – remember next week is LIVE from jongluers.

I’m sitting in bed interrupting a nap so I can type this before the memories fade like the bruise on my arms and the pain in my knee, all acquired on Saturdays show. The theme of the show being Wrath the thing we planned to do was get hold of a couple of pairs of giant inflatable boxing gloves and go at in the studio, this we all agreed to before checking that they even exist (after a quick Google check apparently they do). It was up to me to try and find some, so, of course we went without.

“don’t worry” I assured my co-hosts in the pub before hand “we’ll use the cushions from the sofa in the studio, it’ll be great” And, of course we found that the studio sofa was an all in one leather job. Bugger. Like all the ideas that are simultaneously the best and the worst, the one to sumo wrestle in a hastily drawn carpet circle, was mine. The first two bouts went as expected, namely me winning.

What was unexpected was Phil taking his top off revealing a skeletal body over which and slime excreting skin had been stretched, seriously i think it was some sort of strange smelling oil. It made gripping him a very serious problem like a wiggling bit of soap. The strangest bit of the night came with a passing visit from rhubarb radio director Daniel Cremin who came by to give us cake and was just in time to commentate on the “royal rumble” and let me assure you that there is nothing less regal than three weird half drunk men, one of them topless, grappling each other in a five foot carpet circle.

*I just took a break to go find more beer, its only notable because on the way back a woman shrieked “is that you?” which prompted all sorts of furious metaphysical grumblings until i realised she was talking to someone she recognised behind me*

I was set-up, obviously during one of my frequent toilet breaks they conspired to get rid of me, their main competitor. There are no rules in the carpet circle, but I did think basic fairness would creep in somewhere.

*A nickname i have just came up for myself

Can You Dig It?

Tonight is the night for official Tech Diff movie based research, after how much we enjoyed ‘Chopper’ last week we decided that we would dedicated an entire show to the 1979 movie ‘The Warriors’

I (Rich) am flagging at the minute and as i slink these words into the interwoozle at work I am pumping myself with Ginger Beer and twenty CCs of Pearl Jam in an effort to wake up.

Hope y’all enjoy the show on Saturday as its gonna be ace…..now can you dig it? 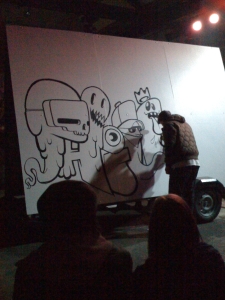 I’m writing this in bed at a couple of minutes past two. It seems without the guiding presence of a job or girlfriend to remind me when to eat or sleep I tend to keep the same hours and eating habits as the flats cat – Hopey. Please don’t despair; my day job is at a school so my girlfriend has used this time to go visit her parents. The upshot being I only sleep between the hours of 9am-12pm and eat all food between two slices of bread for a few days.

But I digress; those of you that listen to the show Saturdays will know this happens a lot. What I really wanted to talk about was what happened after the show last Saturday. Now the word “hero” is bandied about very loosely nowadays, being slapped on firemen and nurses willy nilly, but it seems the only relevant word to describe how we handled the show on Saturday. The show was tough, really, really tough. We had been told before hand that we needed to plug the Stupid Underground event that was going on in the pool in front of the studio and going out live on one of our alternative streams, we are also kind of used to having to compete with short bursts of sound checking that such events have, its not easy but tends to fall in the “waddafuckyagonnadoabout” category.

What we wasn’t expecting was a complete band having to do each individual instrument sound check at a volume that would made a deaf Viking shit himself, and then go on to do a dress rehearsal. Now far be it from me to comment but isn’t the sound supposed to be done in the day, not an hour before the doors open? Maybe I’m just bitter at having to shout against the ten continual minutes of the high hat being tested, or at having a show that we spend a week preparing nearly abandoned and almost certainly handicapped by circumstance beyond my control.

Another event we wasn’t told to plug but we wanted to do anyway was the Secret Wars final at the rainbow warehouse. END_OF_DOCUMENT_TOKEN_TO_BE_REPLACED

As an added bonus to celebrate last weeks shock quiz result your friendly neighbourhood radio friends thought you might want to check out the Motorhead video that we played an excerpt of on last weeks show. Scary chap that Lemmy

For all and any who were listening to last weeks show we have last weeks set list, we even play a modern record! April 4th’s show can be found here

Cypress Hill – Insane In The Brain

Thox Song ( Listen to the show and find out)

Welcome to the Tech Diff blog, hopefully you will be a fan of the show already and if you’re not then you really ought to be by now. Where have you been?

You will find us here from 7-9 on Saturdays and on the listen again function, we are also on Facebook here,  so come and say hello.

Last weeks show (28th March) was a belter –  aliens, keanu reeves, Danny’s quest for fitness and other silliness a plenty mixed with some excellent records.

This coming week we will be discussing Serial Killers (one of Danny and Phil’s favourite subjects) so expect much excitement and probably some pretty gory chat; so make sure you’ve already had your tea, or at the very least you have someone’s hat to be sick into.